How was welding born? 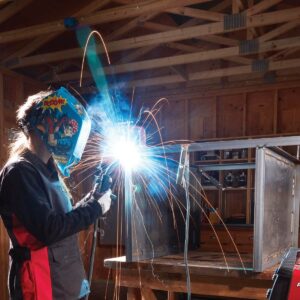 Welding is nowadays a completely natural and very well-known job. Thanks to the development of various advanced techniques of joining materials together, technology and the construction industry in general has seen a gigantic development. Thanks to the welding process, among other things, our world looks like this today.

But how did welding come about and where do we look for its origins? How has this craft changed over the years, how has it evolved and what discoveries have been made over the decades? Well, the process of joining metals together is a subject which has been discussed and reflected upon since prehistoric times. Shortly after the invention of fire by humans, the first attempts were made to join materials together after they had been heated. This was done in order to reduce them to a state of plasticity, which would make it easier to join the individual parts and weld them together. When steel was developed, it became the most common material used to make various tools and even weapons. It was therefore necessary to skillfully join the parts together. This is how flame welding came about. The Middle Ages, on the other hand, saw the beginnings of metal soldering, which greatly developed the production of all kinds of jewellery.

A wave of new discoveries

In the 19th century, two types of welding were invented:

In 1862 Frederick Wöhler invented carbide, which contributed to the development of gas welding. In 1882 the engineer Stanislav Olszewski together with Nicolas Bernados developed the electric welding method. They used an electric arc which glowed between a carbon electrode and metal to melt the material. A metal rod served them to fill the groove between the joined edges of the materials. This method was improved by using a fusible metal electrode in place of the carbon electrode.

In 1894 Henry Maisson developed the technique for obtaining carbide. Three years later, a method for storing acetylene at high pressure was discovered. 1901 saw the invention by Charles Picard of an oxy-acetylene torch, which was used for welding.

The development of welding in the 19th century brought many new methods of welding. It was then that thermal welding began, based on the chemical reaction of iron and aluminium oxides.

The beginning of the 20th century saw the rapid development of acetylene combustion, which was applied to a wide variety of metals on a massive scale. They used an electric arc that glowed between a carbon electrode and the metal to melt the material. This method was improved by using a fusible metal electrode in place of the carbon electrode. In 1908, a Swedish scientist invented flux-coated metal electrodes. In 1924 atomic welding was developed in the United States and five years later submerged arc welding came into use. The 1930s saw the invention of the tungsten electrode, which was used for welding under the cover of various noble gases. At this time, welding tools were becoming better and more precise, which opened up new possibilities and made it possible to develop more complex methods. 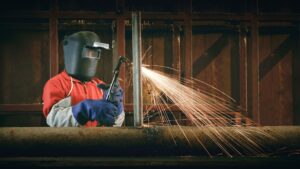 In those days, it was not until after the First World War that arc welding began to be used in Poland, which was usually useful in the construction of buildings or wagons. In 1922, the Polish Association of Welding and Metal Cutting was founded and the Welding Section was established within it. The first congress of welders was held in 1939 in Warsaw, where the Welding Institute was established. However, due to the outbreak of World War II, the time of establishment of this institution was postponed and it was finally established in 1945 in Gliwice. This institute has continued to operate to the present day. From 1951 onwards, welding was taught at technical universities and specialised schools dedicated to this craft. In addition, special textbooks were produced, a magazine for welding enthusiasts was established and even a Welding Commission was set up by the Polish Committee for Standardisation.

Thanks to all these developments, welding has seen a tremendous growth in our country. Many steel structures, bridges, ships and boilers were built during this period. This in turn resulted in the more rapid construction of transformers, automatic and semi-automatic welding machines. It is worth noting that the first welded bridge in the world was built in Poland in the 1930s. Stefan Bryla, a professor at the Warsaw University of Technology, was responsible for its design. The structure was built in 1929. A year later, the first European welded structure was built in Poland. Structures such as the Poniatowski Bridge or the railway bridge under the Citadel in Warsaw, ships, carriages and various types of structures were created after the end of World War II. The Polish schools for welders were able to educate workers of really high quality. Nowadays, it is impossible to imagine the development of technology without the ability to weld. This field is present in almost all branches of the economy.

Nowadays, welding is a highly developed industry. A lot of innovative equipment has entered the market and the role of man in the whole process has been greatly reduced. This has greatly reduced the risk of accidents due to working in difficult conditions. In addition, production efficiency has increased considerably, which allows for much more efficient production of various technologies in large quantities. The products of advanced welding are robust, functional and well made. It is certain that the future will only get better with regard to the automation of welding stations and the accuracy, speed and efficiency of the whole process. Perhaps man will only play the role of supervising machines, which will automatically do their advanced work.

" Soldering - what is it all about?
HDS cranes - what is behind the name? "
Sign up for training
Request for quotation