Freight lift and ship lift course - how to do? 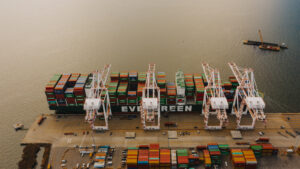 The use of a goods lift or ship's hoist requires the relevant authorisations. These are granted by the Office of Technical Inspection. Before you can get them at all, you have to attend a training course covering theory and practice. This is followed by a state examination. All this should take place in a centre that cooperates with the UDT. Centre for the Development of Human Resources ERGON will provide adequate training in the use of the lifts!

In order to use both cargo lifts and ship lifts, it is necessary to acquire qualifications issued by the Office of Technical Inspection. First, however, you need to take a training course. This can be taken at the ERGON personnel training centre. It consists of a theoretical part, where legal issues and guidelines for the use of these devices are discussed. The most important part, however, is the practical part, where participants use the ski lift and experience everything related to the equipment first-hand.

We receive many enquiries from you. However, there are some questions that recur most frequently. For this reason, we have compiled a set of the most frequently asked questions together with the answers to them.

What is an extract?

Let's start with the definition itself. If you have come across the name 'slip' - it is more applicable to sailing - it means the same thing as a winch. It is used for pulling vessels to the surface, but also for launching them. It is also possible to repair vessels on the slip. Such devices are more likely to be used for smaller vessels, as the winch has to have a lot of strength to launch the vessel. For a slip to be used, a vessel can maintain a displacement of up to 2,500 tonnes. An element of the ship's winch that comes in very handy is the winch. For smaller vessels, such a piece of equipment is not necessary, as the vessel can then be winched out using a car trailer. A slip is also positioned on patrol vessels in order to launch a smaller boat properly. The quick operation provides rescue for people who find themselves at sea and, for example, their vessel has sunk. Such situations can be dangerous, so immediate response counts. It can be seen, therefore, that a ship's hoist can have many uses in different forms. 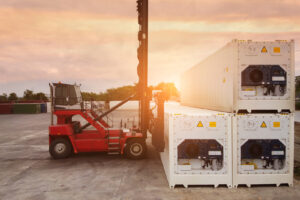 Elements of the slip

The winch consists of an operational section which, more precisely, is a slipway with a flat or curved profile. It is used to pull the vessel ashore or to launch it, depending on the need. This happens thanks to rails laid on the operational surface. It is made up of an upper and lower section, where the former protrudes above the water. The lower part, on the other hand, is positioned in the water. Thanks to its placement at the right depth, the vessel can be guided to the trolleys, which stand on the operational surface. Further elements of the slip are the stations. This is where the vessel is repaired or assembled. The last important part of the slip is the engine room. It houses the mechanical equipment and engines. These devices are primarily used to run the ropes on which the winches are placed.

You are more likely to come across a goods lift than a slip, although both terms can be mistakenly used. However, it is worth knowing that the two are not the same. The former is used to transport building materials. The goods hoist resembles a ladder by its arrangement, which is why it is colloquially referred to as such. It is a platform that works on the principle of a crane. One end is placed on the ground and the other on the ceiling of the building. By means of ropes or chains (depending on the type of goods hoist), this platform is pulled upwards. A freight lift may also be called a skip, which in turn may be confused with a sailing slip. The latter, as previously described, is mainly used for launching ships. 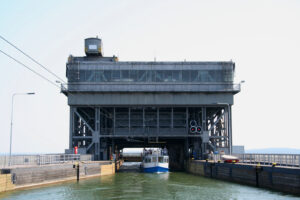 Firstly, due to the distinction of how ships are pulled to the surface, lifts are divided into longitudinal and transverse lifts. Transverse lifts are used more frequently because they are more efficient in launching vessels, and they are also easier to perform. In this type, operations on vessels are performed perpendicular to their longitudinal axis. With longitudinal slips, the opposite is true - ships are launched in parallel. However, they take up less space. Another criterion is the shape of the operating surface profile. In this case, a distinction is made between a single-slope lift, a twin-slope lift and an arch lift. The workstations on the lift may be located at the same level as the operating area or higher than it. The location of the pitches in relation to the operating surface is divided into those on the side (which may be on one or even two sides of that surface) or on the extension of that surface. The last criterion is the shape of the trolleys that can be used on the lift. Then we are dealing with a trolley with a rectangular cross-section or a triangular trolley.

We hope that we have cleared up any doubts you may have about the UDT licence for goods lifts and ship lifts. The ERGON Personnel Improvement Centre ensures the best quality of training and a high pass rate on the state exam. The course on ship lifts may be held in an open form, i.e. open to everyone interested, or closed - adapted to the needs of a given organised group. We conduct training courses in our branches in Warsaw, Katowice, Bielsko-Biała and Krakow, but we are able to reach everyone individually. No matter which region of Poland you are in - we can get you anywhere. Please contact us for a price quote!