Soldering - what is it all about? 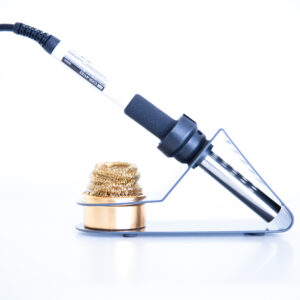 As early as five thousand years before our era, soldering was a very popular technique for joining materials. Archaeology knows many cases of artefacts made of precious metals using this technique. Nowadays, soldering is the most popular method of joining parts of materials next to welding. This technique consists of joining elements by means of solder, which is a metal binder. Its melting point is lower than the melting point of the soldered elements. In order to carry out brazing correctly it is necessary to braze at a temperature higher than the melting point, but not higher than the melting point of the materials being joined. Brazing is used with metals and non-metals (glass, ceramics, graphite). It is possible to join not only homogeneous materials but also materials which differ in structure. The biggest difference between soldering and welding is that welding produces very high temperatures, which melts the additional material and the edges of the parts to be joined. A permanent connection is ensured by adhesion and diffusion. For a brazed joint to form there must be a metallic bond between the solder and the components. For this the liquid solder must moisten the materials to be soldered. Soldering is divided according to the melting point of the solder into

Solder, also called solder, is a joining material and the tool for soldering is a soldering iron or a torch. Special ovens are also used during the soldering process.

Desoldering is used to reverse the soldering. This is a reverse process and is used to repair or replace soldered components. It is an essential activity for repairing equipment. To desolder we can use a soldering iron or desolder, usually together with a tin extractor. To remove the tin we use a soldering iron or desoldering tape. When it is difficult to disconnect components and there is a risk of damaging one of them, specialist tooling should be used. 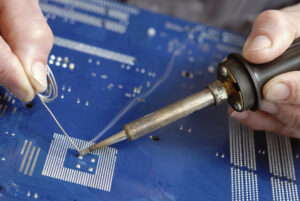 Industrial, mass soldering of components created by the through-hole assembly technique is carried out using the so-called "wave" method. This involves moving the printed circuit after all the necessary components have been inserted. A transverse hump is formed on the surface of the solder, which is placed in the solder receptacle. This creates a wave, the top of which touches the underside of the moving PCB and the metal parts are covered with molten solder. When the solder cools down, it forms a very high-quality connection. Non-contact soldering is based on the heating of components with warm air or infrared. It is used for printed circuits. In this situation the flux with the solder is applied in the form of a paste on different areas of the circuit. When everything is in place the board and other components are heated with the previously mentioned hot air or so-called infrared heater. The circuit then cools, the solder coagulates, the joints cool down and the process is complete. Modern soldering stations that use hot air are called hot air stations. A pump generates a stream of air in them, which is then heated to a specific temperature. Everything is controlled by a microprocessor that regulates the temperature, air flow and operating time. Nozzles are used to regulate the air stream as desired.

This type of soldering is carried out with a lead-free alloy. On 1 July 2006 the European Union introduced restrictions on the use of hazardous substances, including, for example, lead in solders. Developments in technology have necessitated changes in equipment parameters or their complete replacement in order to comply with the new requirements. In technology 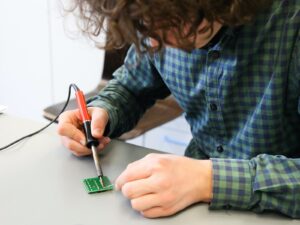 unleaded there are some obstacles to the whole process such as:

There is a risk of capillary beads forming on resistors and capacitors, which can be different: sizes depending on how they formed. The causes of this phenomenon are

A temperature of 215-220 °C is needed for reflow in this type of soldering. Due to the matt and grainy surface of lead-free solder it is difficult to detect a bad connection or so-called cold solder.

Soldering under the influence of nitrogen

This type of process involves the introduction of nitrogen where the solder melts. This improves the performance of the joint. Soldering in a nitrogen atmosphere is used in mass production as well as in manual work.

This type of brazing takes place at a temperature that does not exceed 450 degrees (usually around 320). It involves joining metal with a lower melting point than the temperatures of the metals being joined together. This technique is used at low operating temperatures, for example in electronic circuits, electronic cables, sheet metal etc.

The most common metals used in soft soldering are steel, brass, zinc or copper. Soft solder melts at a temperature of 183-280 degrees. They can be found in the form of wire, plates, powder or sticks. Tin, bismuth, cadmium and antimony alloys are most commonly used in binders. Flux is used to lower the melting point of the solder, stop its oxidation and improve the penetration of hard to reach metal structures. Fluxes are very often found in the form of various caustic liquids, a special paste or in solid form.

A type of soldering that takes place at temperatures above 450 degrees. Hard solders are used in this process. By means of brazing, carbon steels, tungsten, molybdenum or nickel steels are joined. It is also used with gold, silver or copper. In the brazing process an oxy-acetylene torch or a brazing lamp is used. It is also possible to braze inductively with an electric current or on a blacksmith's fire. It is very important to use the right fluxes, which are used to dissolve metal oxides, making it easier for the solder to dissolve and penetrate more thoroughly into all crevices. In addition, they prevent oxidation of the whole process.

Difference between soldering and welding

During the welding process, both metals melt through the heat generated. This is due to the formation of an atomic bond, which greatly improves the bonding effect. Soldering, on the other hand, does not create this kind of bond, which means that a third metal, called solder, is needed to join the parts together. After welding, a thick and ugly-looking seam is left which has to be masked later. Solder, on the other hand, provides a better and less conspicuous effect. Soldering also takes less time than welding, which is definitely in its favour.

" What are tower cranes?
How was welding born? "
Sign up for training
Request for quotation