A few words about cutting with acetylene-oxygen, plasma and electric torches

Who among us has never watched a film featuring a mechanic in a protective suit and face mask, with sparks flying all around him? There was certainly a blowtorch in his hand. Pretty impressive, right? In this blog post you will learn what cutting with a torch is all about, what applications torches have and how working with this tool looks like in short. 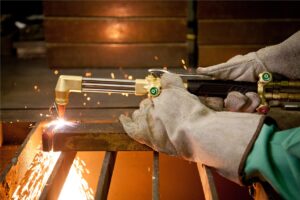 Curious? Have a read!

This type of cutting is known as gas cutting or oxygen cutting. It is a commonly used method of separating metals. This method is most commonly used to cut unalloyed steels and low alloy steels.

In essence, the process involves heating the material to ignition temperature using a flame, followed by combustion and subsequent blasting of the liquid metal with a pressurised oxygen jet. The method makes it possible to cut sheets up to 30 cm thick.

Known as a metal cutting technique, the essence of which is to melt metal and eject it from the cutting slot. The whole process is carried out by means of a special plasma arc, acting under the influence of high kinetic energy.

During the plasma cutting process of metal sheets, the material to be processed melts and is then blown out of the slit. This process is made possible by the cutting technology using high temperatures at the core of the plasma arc, as well as high jet speeds.

Cutting is performed in two directions, either perpendicular to the base or at an angle of 0 ÷ 45°. It can be driven manually directly on the material to be cut, on a rail guide, according to an angle or with a circular saw. However, forward travel is recommended.

How do I obtain a torch cutting licence?

Thinking about torch cutting work? By law, in order to do cutting work, you must first try to obtain a licence, which is issued by an accredited body. It's not that easy to get accredited, as quite a few training companies have found out. As a result, only a few centres can train and examine welders and cutters. Such companies include ODK ERGON - Convince yourself of this now and check out the company's offer.

" Fire protection training in ERGON
How to choose training and prepare for the G1, G2 and G3 qualification exam? "
Sign up for training
Request for quotation